ICED's Reply to AFA re: Apology and Our Follow Up Response

AFA had requested that ICED formally apologize for the ICED 1880 Milan Congress resolutions proclaiming the pure oral method to be superior and the law of the land in Deaf education. ICED's response is below as is AFA's follow up reply. 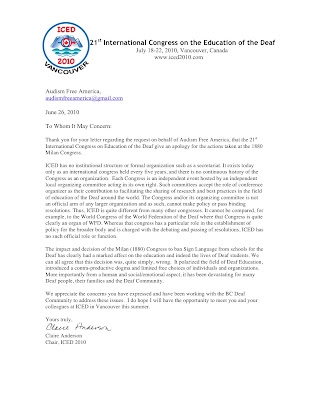 To Claire Anderson and the 2010 ICED Planning Committee,

Thank you for your letter in acknowledging the concerns expressed by Audism Free America (AFA) regarding the lack of apology that appears to be forthcoming from ICED for the 1880 Milan Conference resolutions.

While we appreciate the uniqueness of the organizational structure of ICED, there is clearly a continuous history of the Congress as your website traces the lineage of the current Congress back to 1878. In addition, those of you who take on the organizing of the conference do so under the banner of ICED. The explanation of the ICED organizational structure dangerously veers toward an attempt to deny accountability.

Nevertheless, we hope that you can look positively at other cases in which governments/organizations/individuals have made public apologies. For example in 2008, the Australian Prime Minister formally apologized to the indigenous Aboriginal peoples. This acknowledgement of the pain and suffering was caused by laws and policies enacted centuries ago. This apology is a first step toward healing. There are countless other precedents of apologies made in recent years:

In 1998 the Roman Catholic Church apologized for its inaction during the Nazi Holocaust.


In 1998 the United Church of Canada issued an apology to former students of United Church Indian Residential Schools in regards to cultural assimilation and child abuse.


In 2008 the American Medical Association issued a formal apology for discriminating against black physicians, which did not end until the 1960s

In 2008 and 2009 the US House of Representatives and the US Senate apologized for slavery and Jim Crow injustices.

Your awareness of some of the devastating effects of the 1880 ICED Resolutions as “wrong” lends support for a formal apology. Scholars have noted that the concept of regret contains no right or wrong associated with the action. In addition, “regret” communicates that the consequences of the resolutions were unintended or something ICED had little control over.

We believe your intentions in working with the BC Deaf Community are good, but you should do the right thing. Be accountable. We are owed an apology.

AFA
Posted by AudismFreeAmerica at 9:47 PM

AudismFreeAmerica
Questions/Comments- Email to AudismFreeAmerica@gmail.com Audism Free America (AFA) is a grassroots Deaf activist organization in the US, which advocates for Deaf American rights, cultural resurgence, and seeks primarily to challenge the ideological foundations of audism in America. Audism is attitudes and practices based on the assumption that behaving in the ways of those who speak and hear is desired and best. It produces a system of privilege, thus resulting in stigma, bias, discrimination, and prejudice—in overt or covert ways—against Deaf culture, American Sign Language, and Deaf people of all walks of life. AFA is committed to: 1. human and linguistic rights of Deaf people 2. unmasking audism and media misrepresentation 3. advocating for future generations